A lot of the responses to my previous post on taking a sabbatical that I received privately were inquiries about what I was up to, and a lot of questions around what all this Orbital Jigsaw mumbo-jumbo is about. So, rather than write dozens of individual descriptions, I thought I would take some time and lay out how it was born, what it is, where it is today, and the plans I have for it going forward. Many have approached me over the years about getting started with blogging and podcasting, and this could somewhat serve as a primer of what all goes on behind the scenes of a proper operation.  It’s not just sitting down and writing unfortunately.

I’ll put the TL;DR version up front here, but if you’re interested in the full story, read on below!

Orbital Jigsaw is a platform that corrals all-forms of entertainment we produce, including a network of podcasts of various formats, upcoming video content on YouTube, and written content on our blog, and in doing so provides a single stream of content for all of our fans across all of those formats and vehicles.  Our most popular show to-date is The Concession Stand, a weekly show hosted by Nick Howell and Andy Nelson, where we geek out on tv, movies, video games, and consumer tech. More of these will be added to the platform in the coming year as we acquire new talent and launch new shows.

I’ve lived in Los Angeles for the better part of a decade now, and when you live here, you have a way of finding people that do stuff in the entertainment industry (i.e. Hollywood). Not everything is all glitz and glamour in show business. That’s one thing you learn very quickly. For every on-camera talent, there’s 100+ individuals behind the camera building sets, hanging lights, doing hair and make-up, or any number of other jobs. It’s a very blue collar industry in that respect.

It was never really something I personally had any aspirations to do myself, but there was always a friend that needed help, or a project that sounded fun to be a part of. Flashbacks of blasting through Downtown LA in 2007, standing up out of a convertible whilst holding a camera come to mind, for example. As more and more of these projects surfaced, I became more and more interested in supporting and backing them, and needed a place to cover those expenses … a tax shelter you could say, to differentiate business activity from personal accountability.  That’s really all it was ever supposed to be. This was really the genesis of where it all came from.

At the same time this was happening, I was getting into blogging and podcasting more and more, and I started remembering just how much my inner Geek loves entertainment vehicles such as movies, gadgets, and video games. I decided I wanted to create a new site around that.

What’s In A Name?

Believe it or not, this is the hardest part of the entire process. It really is. For anything you might come up with, you have to make sure the domain name is available, and that all social media handles are free.  This was arduous, to say the least.  You have no idea how many names I came up with, only to find out that the domain wasn’t free, or that the twitter account was taken.

Finally after weeks and months of really grinding on this, I sat back and wrote down things that I liked in 2 or 3 columns.  Well, two of the things that were on that list wereI “doing puzzles” and “space stuff.”

orbit puzzle? No
solar jigsaw? No
orbiting jigsaw? No

That was it. I knew it as soon as I said it out loud. It was catchy. Frantically, I checked the domain… it was FREE!  Checked all the social media platforms and no orbital jigsaw accounts anywhere.

Initially, as I didn’t truly have time to write consistently or daily/weekly for the site, I sought out some friends to create content centered around the reviews of films, games, etc to post.  Remember, my main purpose at the time was to have the name and LLC, but I figured why not allow some up-and-comers to write some content, learn about blogging, how it works, etc.

This takes more teeth pulling and encouragement than you’d imagine.  Similar to putting someone in front of a microphone for the first time on a podcast, for some reason people lock up when they realize what they’re saying is going to be possibly seen or heard by all of the Internet.

After a while, a friend starting writing some reviews on Facebook and we transposed those over to WordPress for the site. Unfortunately, after some time, I realized that I wanted him to do it more than he wanted to do it and the interest waned and the reviews stopped.

Life continued, jobs and priorities changed, and the site stagnated. I had the beginnings of a long-term vision but hadn’t truly fleshed them out yet.

Earlier this summer, after deciding to take the aforementioned sabbatical in last week’s article, a friend encouraged me to re-launch Orbital Jigsaw as a media platform and fire up The Concession Stand podcast with a new approach that catered to the vision of the site.

And there you have it. We’re just shy of our first 20 episodes of The Concession Stand and have really fine-tuned it into something we’re very proud of and have begun to see the numbers climb and receive some amazing feedback.

We’re currently in development on 2 or 3 new podcast and video shows that will become part of the site.  One of these will be focused on the trials and tribulations that dreamers face when chasing various roles within the entertainment industry, and what life is really like. The hope is to shine a light on what it’s really like to be a jobber in Hollywood, trying to “make it big.” More on this very soon. 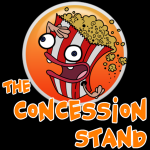 Andy and I are seriously discussing converting The Concession Stand to a video show, similar to something like the After the Thrones fan show on HBO.  We’ll still syndicate the audio to the same outlets, but we’re working out the logistics of now doing a complete production with a full set, cameras, and post-production.  Stay tuned for more on this in 2017!

Several writers will be coming on-board as well throughout the year to craft daily blog content around all aspects of entertainment, and that will eventually lead to them doing their own video content as well.

There’s also a complete website overhaul in the plans to be more modern and conducive to the kind of content we’re creating.  There’s just lots of stuff on the task list to do and we’re pecking away at it as fast as possible.

Any show needs fans and followers!  To those of you that have been following along and have listened and sent in your feedback, we love it!  Thank you! We would love it if you would help us share the posts on Facebook, Retweet the shows on twitter, and submit reviews for us on the iTunes Store.  This is an important part of being included in search results and raising additional awareness of the show and we need your help to get that done!

If you’d like to send more long-form feedback, I certainly welcome you to email me directly to [email protected] as well!

Hope you found this helpful and enjoyed the info, and thanks in advance for your support!

For more than 20 years, I have lived in and around Enterprise tech, both hands-on, and at multiple vendors. In my spare time, I enjoy home projects, building my studio, live streaming, podcasting, & creating content.
Subscribe
0 Comments
Inline Feedbacks
View all comments
My Kit.co