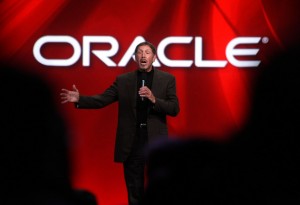 I love watching Larry Ellison speak.  Most times, it ends up being the most exciting, interesting, and controversial thing that happens at one of the biggest conferences in the world.  He has a knack for grabbing the audiences attention, stirring the media, but still giving captivating keynotes.

Well, it’s time for Uncle Larry to do it again in 2011!  Oracle OpenWorld 2011 is here, and I’m here to tell you what NetApp, as a Premier partner, is bringing to the show!

I’ve had the pleasure of attending the last couple of OOW’s, and they are absolutely tech-focused.  Last year, as a customer, I had the benefit of attending on behalf of @VMware as a customer reference to present our story of “Virtualizing Oracle: YES YOU CAN!” to booth visitors.  Judging by the turnout in each of the sessions (they were standing 3 and 4 deep in the aisle beside the booth), virtualizing Oracle might be one of the hottest and [again] most controversial topics still on the table.

Unfortunately, the stance on running Oracle workloads on VMware hasn’t changed, but that hasn’t stopped the exposure and growth of customers acquainting themselves with what they can and can’t do.

More of that in a bit…

First and foremost, NetApp has at least one speaking session every single day of the show!  For a complete list, go here and make sure you register for them!

Secondly, for the social-medialites that would like to keep up with @NetApp activities at the show, you can use both hashtags #OOW11 and #NetAppOOW.  You can also keep up with all media and blogging activity at http://www.netapp.com/oow2011.

Lastly, stop by NetApp booth 1501 and discover how you can achieve private cloud simplicity and agility with a shared IT infrastructure built on NetApp efficiency and flexibility.

Now…back to what we were discussing earlier.  Before we get into the diatribe of whether or not virtualizing Oracle is supported, I wanted to bring something most people overlook to the forefront of your minds, and is also typically the most commonly discussed reason people avoid virtualizing Oracle on VMware.  If for no other reason that to arm you with hard questions and conversation topics to take to the show.

Take a few minutes and gather your DBAs and ask, “Do we really need Enterprise licenses?  What does Enterprise get me that Standard doesn’t?”

“Why is that important, Nick?”

Well, simply put, Enterprise Licenses use a complicated per-core multiplier.  For SPARC systems, the formula goes something like:

Have an 8-core Sun system?  Probably more than one, right?  Dataguard, etc.  So let’s calculate…

…just to be able to run Oracle software on your hardware that you likely already dropped another quarter-mil on.  (Be sure and multiply that by two to cover your secondary box!)

For x86 platforms, the only thing that is different is that the multiplier drops down to 0.5x.   So let’s say you’re running them on HP servers (w/ 2 quad-cores) instead, and calculate…

Enterprise brings with it things like DataGuard, AWR for historical statistics, RAC, etc.

But what if you don’t really need these things?  What if you have 3rd party software already (or it’s a cheaper option), don’t need DataGuard because you’re using NetApp’s SnapManager for Oracle product, and really don’t want to deal with the headaches of RAC?  (There is also rumor of a “Standard” license version now with RAC capability…)

I’m here to tell that there is this aura of inferiority that gets projected to DBAs when you run Standard instead of Enterprise, but other than the items (and a few others I might not have mentioned), it is the same license.

….with one GIANT exception…

No more per-core licensing multipliers.  Standard is a per-SOCKET license.  Make sure you read that clearly.

Yes.  Yes I did.  So let’s recalculate for Standard…

Remember that 2-socket HP server we mentioned above?  And how it would cost you $190,000 to license it on Enterprise?  Check this out…

I’ll leave you with another concept I coined a few years ago, called “Cluster Islands.”   Have a read of this post that I wrote back in March for further understanding.

Ah! Glad you asked!  If you’re familiar with VMware, you know that there are entities known as Clusters that contain ESX hosts.  There is another technology called DRS that enables vMotion, where VM’s can move around between any host within that Cluster.  With that in mind, we are required to license every host/socket/core that your VM could land on.  We don’t want to do that for our big 10+ host cluster.  But what if we created a separate cluster, stuck 2-3 ESXi hosts in it, and only ran our core Oracle database VM in there?  Then we only have to license those hosts within that cluster that the VM could ever land on.  You could even go so far as to power down one or two of the hosts at your discretion, and it’s up to you to define whether those should be licensed as DR boxes.

The additional beauty of this is that once you’ve licensed all hosts in your Cluster Island(s), you can then run as many VM’s or workloads in that Cluster as you have hardware/resources available!

Make sense?   If not, ask me in the comments!  I want to save you money and heartache and get your Oracle instances virtualized!

Jay Weinshenker ( @aus_effendi ) wrote an excellent post earlier this year highlighting the other big topic of discussion around Oracle on VMware:  SUPPORT.

I highly encourage you to do your own homework, as there are quite a few of us out here that have been trying to get the word out.

At the end of the day, I want to arm you with some questions to get answered at OOW2011.  If they don’t get answered, come find me here or on twitter @that1guynick and we’ll get you squared away.

Have fun at the show!

Nick – recommend you put the licensing into a matrix – would be easier to grasp and I certainly think it makes the argument to virtualize stronger. — my .02